I want to personally thank the Canadian press for their continued interest in this blog. As you know, this community has several thousand subscribers around the world and some of the sharpest minds you’ll find making comments on any blog. We appreciate your support.  Two reporters in the Canadian press asked us to take on some larger issues happening in the world within the framework of mental toughness and critical thinking. The next day Iran’s supreme leader makes yet another delusional statement: Israel is doomed. This is a man who claims to be a religious leader and presides over the welfare of 72- million Iranian citizens. This is the same guy (Ayatollah Ali Khamenei) who  say’s Israel is a “cancerous tumor” and “must be wiped off the map”  This is another reason the critical thinkers of the world have to continue to stand up, speak out, and get rid of these delusional leaders operating at a 4th grade level of consciousness. ( surely an insult to all 4th graders-my apologies!) As always, I can’t wait to hear what you guys have to say about this—and either can the Canadian press!   This audio post is 4 minutes.   Steve Siebold 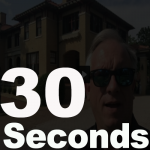 Why Must I Suffer?

Are You at Peace with Yourself?

Get Tough and Retire Rich

8 thoughts on “Is Israel Doomed?”